From the Barrow Valley 2

People say that nowadays very few people not willing give of their time to help others or do the jobs that no one else wants to do, well John Fagan of the Carlow & Dist Club is not one of those. Back in late November or early December, of a Sunday morning, we were heading home from my mother’s place, heading down the Pollerton Road, at eight thirty in the morning and there was John, having just finished painting the front of the Carlow & District pigeon club, we stopped for a chat and John, as a registered painter, said that he had volunteered his services to do the job.  All the club had to do was supply the paint and away he went, the jobs a good un. 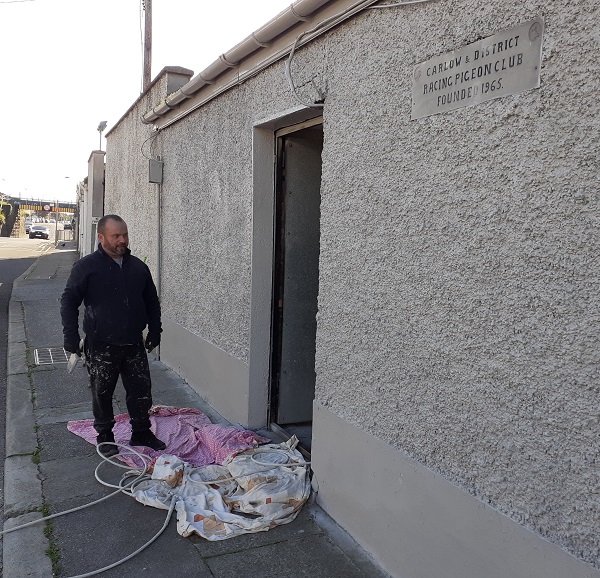 John has raced pigeons with the Carlow & Dist for over twenty years now and can more than hold his own in what is a very competitive club, winning several first’s each year.  John’s father, Patsy, was a founder member of the club all the way back in 1965 along with Tom Moore, Frank Archbold and a few more, the latter two still racing today, although Patsy gave up racing some years ago, he keeps in touch through his sons and grandson.

The club house has been situated on the Pollerton Road in the centre of Carlow town since 1972, long before most of the current members were born.  It had been a marking station for North Road National races for years, with some of the best pigeon men in Ireland having their birds marked there, the likes of Ken Reed, Reggie Turner, Phil Whitmore, Jack Whitmore, Bobby Hore & Robin Hillis, all from Wexford and now all sadly no longer with us.

The Dobbs Bros, Crosby Bros, Cisco o Connor all came to Carlow to have their birds marked, under the supervision of Noel o Connor, there was always a willing band of helpers, and with the lorry not arriving until the early hours, the time was spent spinning yarns and eating chips, until Richie Kealy and Thomas Walsh, driver and conveyer, arrived, then it all got serious, Richie was not one for hold ups and the lorry had to be loaded pronto, away they would go to Larne in time to catch the ferry for Stranraer and on to the scheduled race point.  This was the company we kept when we were much younger, we learned the trade of pigeon racing and administration there, with the giants of pigeon racing, we learned to set clocks, mark birds, cleaning baskets and the numerous other jobs that it takes to keep a pigeon club up and running, and that was only to get the birds away to the races, we also had to learn how to do the results on their return, but that’s a story for another day, thankfully most of the lads that served their time under these stalwarts, and a few of the younger ones that came along a little later, are the ones that are now looking after the affairs of the members in the five clubs in the Carlow area to this day.

Frank Archbold, Jimmy Hurley, Francis Corcoran, & Joe Brennan, for the Barrow Valley RPC.  Big Ger Moran, & Colm Keating, in the Carlow Premier RPC. PJ Nangle, Anthony Kavanagh & James o Connor in the Carlow & Dist. Enda Kelly Roly Brennan & Pat Farrell in the Three Counties RPC and finally Tom Gorman, Dwyane Brennan & Joe Mernagh in the Carlow South RPC. These are the guys that now administer the sport of pigeon racing in our area, and thankfully we all have a good working relationship with each other which is a real bonus when you have to look after the needs of the many pigeon fanciers in each of the clubs involved.

It has taken time to get to this point, not without its ups and downs I might add, but the crews that are in place now have been there and done that, we’re all a bit more older and wiser, the people mentioned are the ones that have to pass on the legacy of pigeon racing in Carlow to future generations and remember that the sport of pigeon racing is what it’s all about and long may that continue. 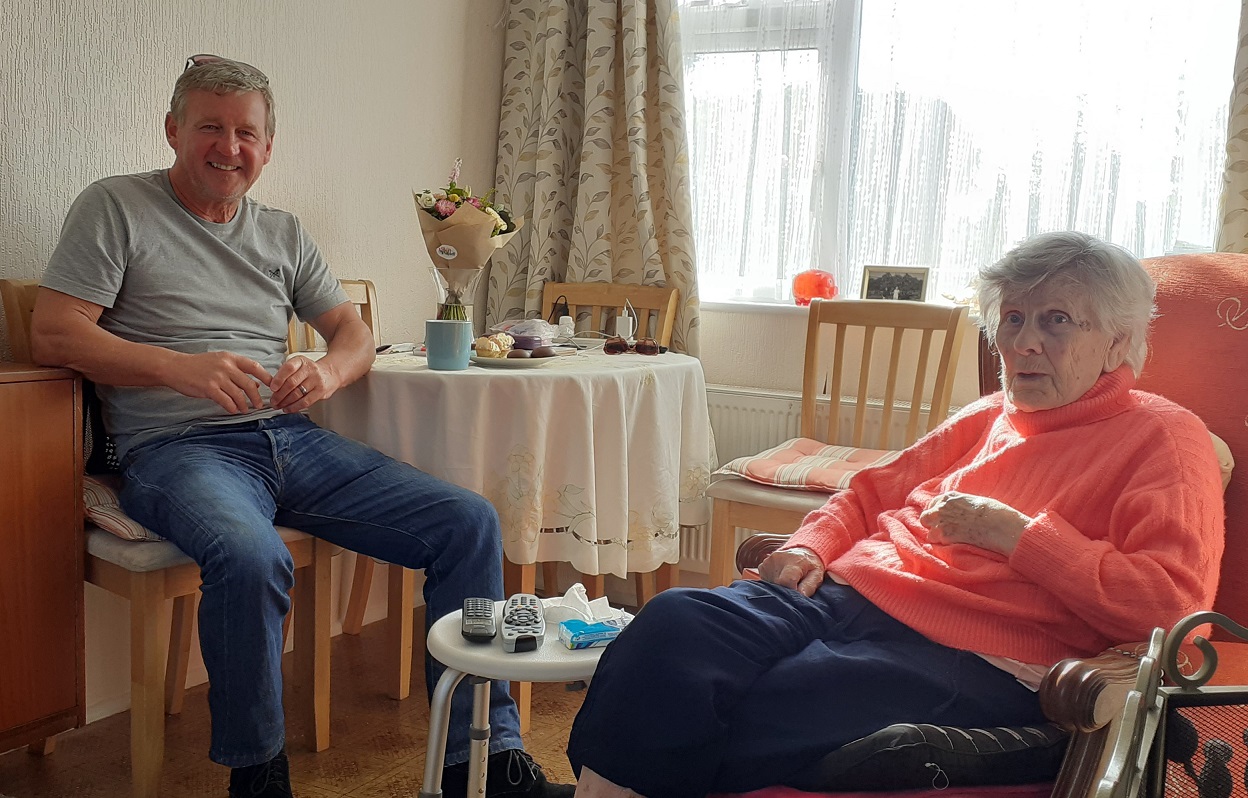 Paul Gunning on a visit to my Mams, before lockdown.

Just seen recently that Ian Evans [ RPRA ]  has been earning his corn recently, clarifying the position as regards channel racing for the 2021 season, this work by Ian and the many other officials that do sterling work for the benefit of the fancy in general should be acknowledged and applauded, remember, they get enough stick, when things are not going right, so, credit where credit is due.

Whilst on the subject, I’m afraid that our own INFC organisation was not been very forthcoming with information as regards the situation last year, little or nothing was said or more importantly relayed to the general membership as to what was happening, with no updates announced for the whole of last season, or if there was, they didn’t reach the majority of the membership. Thankfully just lately, I have seen what I think may have been some sort of press release from the INFC regarding fees and a proposed race programme for 2021, however, I’m not sure if it has reached many of the membership, as when I inquire, most say they have heard nothing, I feel that the committee or whoever is in charge of the INFC should take into account that members like to be informed and kept up to scratch on what’s going on, be it good or bad news, in what to us is one of the premier racing organisations in the country. 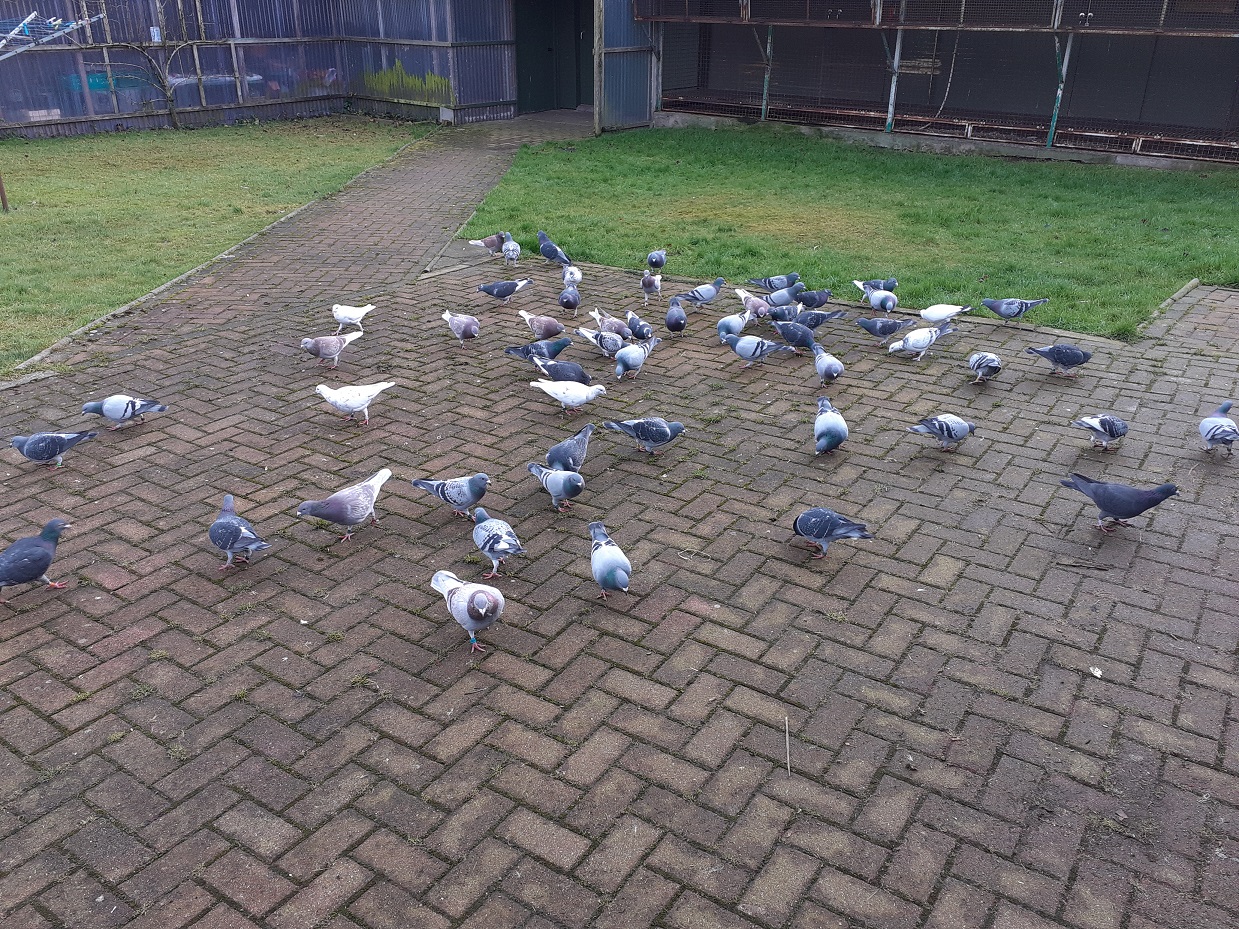 Tit Bit on the patio for some of our own birds, January 2021

Hopefully, by the time this is in print that the situation as regards racing will be clarified, that Brexit will have settled down, Avian Flu has run its course for this winter and that Covid 19 has subsided so that we can all get back to some sort of normality, that is not to understate the terrible anguish that this horrible decease has brought to thousands of families both here and in the whole of the UK. 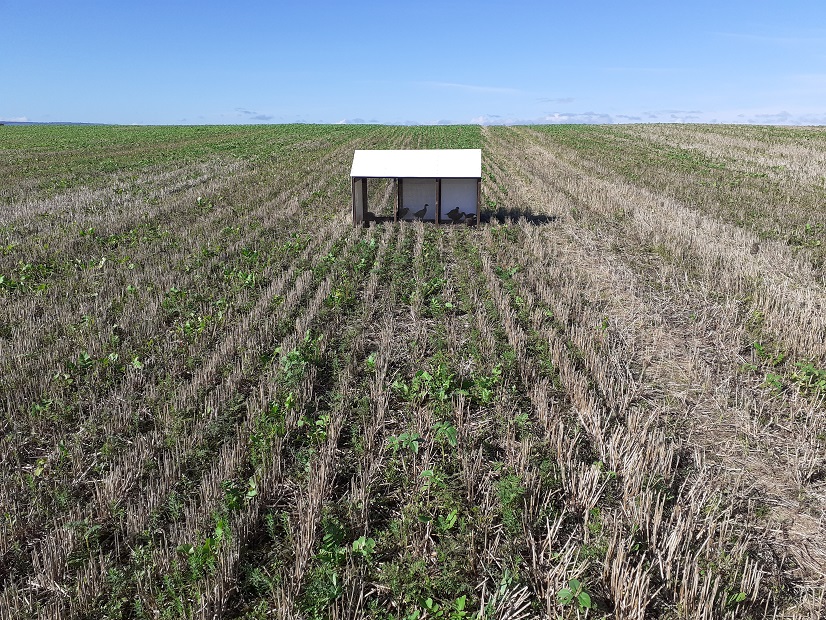 One of my Partridge Pens & Barney, watching for bolting rabbits during the harvest.