The Yearling Nat for the INFC was flown as arranged on Wednesday 16th June with entries race marked in Lisburn on the Monday, members were invited to attend at various times over the day to ensure no large numbers gathered at any one time to keep within the Covid 19 regulations. Great work carried out by many teams of helpers, and the Secretary Trevor Topping available all day to sort out any problems. The entry was slightly down on the previous race in 2019 which I suppose was expected, 511 members sent 3411birds competing for £26,813 in pools and prizes. Due to weather problems liberation was delayed until 11.30am into a Lt South westerly wind and the race was once again kindly sponsored by Versele Laga & H Beattie & Son. The late liberation was a difficult call and at the end of the first day just 70 birds made home lofts and under 300 in race time, although, a good number of others have turned in. This race has always been one of the most successful since added to the programme and I well remember the late L O Barr and myself putting the idea forward first flown to celebrate H M the Queen Jubilee Year.

The Mid Antrim area had the best birds, and what a result it was for Alan Darragh of Cullybackey having two birds together for 1st & 2nd Open and now the winner of this Yearling Nat Classic for the 3rd time which is a record added to another record that of now 7 x 1st in the INFC which includes the Blue Riband of Irish racing the Kings Cup. Danny Dixon from Dunloy in County Antrim, another former 1st Nat winner was 3rd Open and all pooled to collect £2,638 and 1st in the Mid Antrim Combine.

If a fancier wins one National in his life-time, he has achieved more than he could have wished for, if they were to win two then fanciers would say this man's some racer but when a fancier wins 7 (Seven) Nationals there's no words to describe this amazing achievement. Alan Darragh of Cullybackey won his 7th National on 16th June 2021 at 19.18pm when he timed the winner of this year’s Sennen Cove Yearling National. For the record Alan's seven Nationals wins have been the Jersey Kings Cup 1986, Sennen Cove Yearling National 1989, 2010 & 2021, Friendship National Fougeres 2003 & Portland 2006 and the Old Hens National from Wadebridge in 2005. He has also been 2nd National on seven occasions 4 of these beaten by loft-mates. Racing with the NIPA he has won 1st Open Skibbereen Inland National in 1988 and 1st Open Penzance & Penzance Classic and has been twice 2nd Open in the NIPA French old bird Derby. One may ask is there a better CV in Europe? I Don't think so. Back to the race and Alan had two birds arrive together, first to trap was a blue cock racing on widowhood followed 37 seconds later by a blue chequer hen sitting on eggs, a third bird arrived later that evening at 20.37pm to win 34th Open. The first three birds are all related in some way and contain a lot of the old bloodlines including "Champion 05" the NIPA Skibbereen Inland Derby winner of 1988 and his 2nd Open Wadebridge YB National pigeon. Another unbelievable day’s racing from this top fancier and one thing's for sure, this won't be the last time he's featured in a Top 10 National report. 7 x 1st INFC is as good as it gets, it could be a long time before that is equalled and the record in the meantime will stand with one of the best racers in the Island of Ireland – Alan Darragh. Mervyn Eagleson PO Mid Antrim.

In third position is Danny Dixon of Dunloy in Co Antrim. Danny is another top racing loft having 3 x 1st Open National wins and countless other top 10 positions on his CV .The first of his National wins was the INFC Skibbereen YB National in 1998 followed by the NIPA Rosscarberry YB National in 2006 and his third win was the INFC Penzance YB National in 2010. Danny's 3rd Open bird a blue chequer cock racing on roundabout was timed at 19.33pm for the 342 mile fly to the lofts in Dunloy. As a young bird it flew the Talbenny YB Derby and this season it had most inland races with it's first water race being the Yearling National. Dam is a direct Joss Josson and the sire is August Van Aert. Danny timed another bird early on the second morning to win 70th North Section 92nd Open. Mervyn Eagleson PO Mid Antrim Combine.

The best bird in the hot bed of East Antrim was timed in Ballyclare, the local club have an outstanding record from the long-distance events. Trevor's bird was a Blue hen, she was flown on Roundabout, her last race was 1st Talbenny. This hen was 1st Section Talbenny Y B Derby last year and she was bred off Trevor's dad's pigeons. A great hen, something for the future. 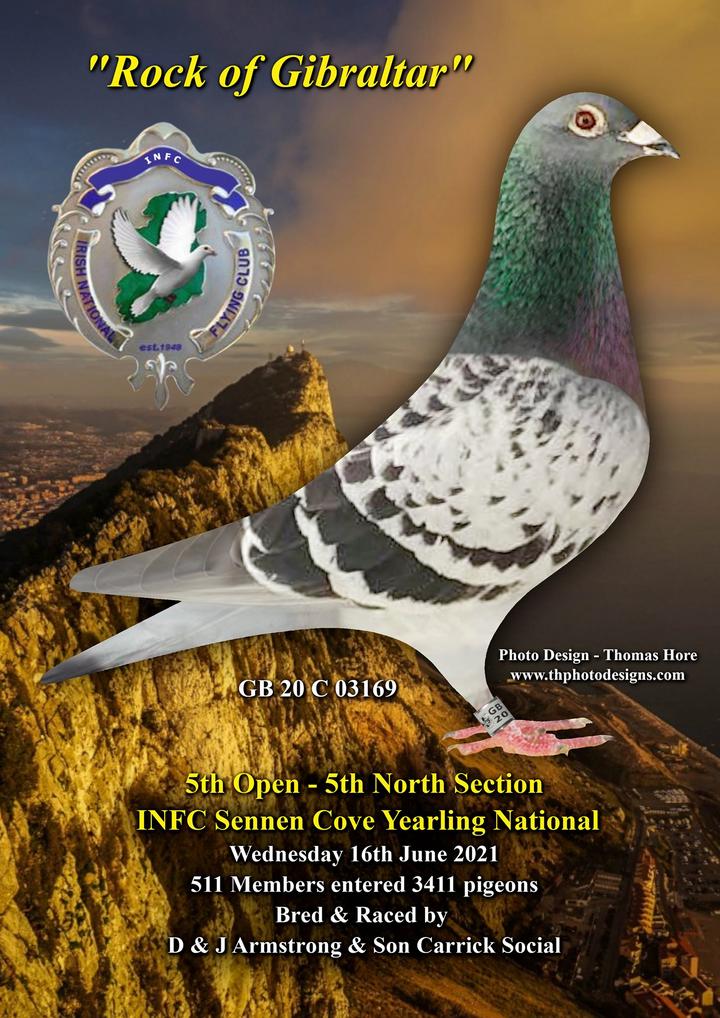 Another top loft in East Antrim, Jim now racing on his own, but I well remember covering their racing especially in what was at one time the premier local club Carrick & District that is now closed leaving just Carrick Social in the local town. This race Jim timed Blue cheq cock at 19.13hrs flying some 321 miles and has now been named “Rock of Gibraltar”. He is 50% Leo Herman’s bred by Gary Cox and 50% Leo van Rijn bred by Eddie Arthur’s of Ballcarry & District HPS.  It got 2 inland races and 1st Talbenny it is raced double window hood system, never won any prizes but raced steady.

The Newry and Banbridge area have a long-distance tradition of success winning at the highest level that included the France long-distance events in the NIPA and including both the Blue Riband Kings Cup and the Friendship National. The Kings Cup had been won on three occasions before my first visit to the area in 1984 when Russell & Moffatt won from Lerwick and then just a few years later in 1989 when R Carson & Son won the Blue Riband event from Rennes. Diamond Carson had the big winner in the NIPA Premier OB National in what was a fantastic race last season. C McArdle & Son had the big early arrival in County Down and the loft topped the Banbridge Centre. Dam of their latest winner “Brogans Boy” was “Wee Ellen” who herself finished 2nd Open INFC in the YB Penzance National of 2018. Over the past few years, have tried to bring in distance birds from Buckley, Donnelly, Mark Ewbanks, W Sawers and J Brush, all fantastic local area lofts. Our second national young bird came direct from Glen Buckley and Sons of Annaghmore in a Kit of 6 young birds. The sire Van De Bulk cock and dam a Soontjen hen, many thanks Glenn. The sire of “Brogans Boy” was a gift bird from Donnelly Bros on Newry City, this one is a grandson of their YB Penzance Nat winner in 2009, another difficult event that had less than 200 bird’s home. This cock was put to stock after being hawked in the YB Nat Penzance in 2017, turned out a good move that. On this occasion Brian and Steve would like to thank both Donnelly Bros and Glen Buckley & Son who have been long time friends and gave their absolute best. The birds are fed on Natural from Donnelly Bros and training is supplied by Ivan Mawhinney.

It gives me great pleasure to be writing this as the brothers have been on the verge of a big national result, it finally came on the 16th of June with the partnership clocking a fantastic blue yearling cock to take 1st Club, 7th North Section & 7th National from the 2021 running of the INFC Yearling National, a more impressive performance considering the difficulties faced by our birds that day.

The cock has been an outstanding performer on the road as a young bird and yearling with excellent results in his bio, as a young bird he was 1st club, 10th section E 20th open in the Fermoy 5 bird, 1st club, 30th section 58th open Fermoy, 4th club 41st section E 99th open Talbenny young bird national. As a yearling he had two second club Fermoy and Fermoy 5 bird with this latest 7th National. He is a Kees Bosua Figo pigeon, his sire was a gift from the top partnership of Thompson and Lunn, who originated from the loft of the dam, which was a gift from Bernie Cochrane and Herman McAvoy of Kinallen View Lofts, the home of the finest collection of Kees Bosua Figo pigeons outside of the home loft of the Miracle man from southern Holland. Paul and Jim would like to congratulate the other prize winners and to thank all friends for the congratulatory messages and calls. Alan Larkin PO.

The ever-consistent partnership of McComb Bros Killyleagh score another top result. Birds sire bred by P  McCullough and Dtr. of Downpatrick and dam R Moore and son of Bangor, bred from some of the best bloodlines in County Down.

Adam Palmer holding the winner and Rodney Graham having the 2nd bird timed in his left hand and the father in his right.

Greyabbey in County Down is the home of the partnership of Adam Palmer, Rodney Graham and the late Bob McKay racing in the East Down Combine’s Ballywalter club. For many years the partnership was Bob McKay and his son in law Adam Palmer and then latterly the partnership was joined by Rodney Graham. Over the years this team have scored numerous top positions in a lot of top races. They entered 6 birds in his year’s INFC Yearling National from Sennen Cove recording two home in race time. The first of these and the provisional 11th Open in the race on 1161 is a Blue cheq hen which was timed at 7.17pm on the first evening. The breeding of this hen is from the best of birds from Bingham & Seaton, Adam and Rodney extend their sincere thanks to them for all their help and birds. The hen herself had flown every race in this year’s programme to date and when I asked Rodney, was she natural or Roundabout he replied “fighting” as she was on a jealousy system with her mate having another hen as well of which she was very jealous and gave her that little extra incentive. Clifford Browne PO.

The INFC Committee are grateful once again for all the help at the race marking, and also all those involved in the various Clock Centres across Ireland including the temporary stations an Edgarstown in Portadown and Coleraine, every little bit of help is appreciated. On a personal note, many thanks to all those who supplied text and photos for this report or helped in any other way. The more info we get the better job can be done, any little snips, details of the bird itself plus info on the sire and dam. Any awards won previous, how long in the birds etc. ASAP after the race.

Email: This email address is being protected from spambots. You need JavaScript enabled to view it.