After six or seven races in Ireland it was time to move to the cross-channel programme, five lorries almost full were unable to release due to terrible weather conditions in Wales and over the route home on the appointed day Saturday, waiting till early afternoon before making the decision to hold over. Sunday was a beautiful morning and early preparations were made for a release, good conditions over the route and at the home end. Liberation on Sunday was confirmed at 9.00am in a Lt North to NW wind. Hopefully, it turns out well and sets the local lofts up for the next few weeks, the INFC Yearling Nat is due to be flown next week from Sennen Cove and the prospects of France in early July depending on regulations at that time. The result had a photo finish between two lofts in Coleraine, Terence McCrudden of Coleraine & County Derry was just ahead of Diamond Bros & G McLaughlin, both doing velocity 1358.

Terence McCrudden from the Coleraine & County Derry RPS topped the NIPA from Talbenny, he has named the bird “Sammy T”after the late Sammy Thompson.

Best in each NIPA Section:

1st Talbenny Sunday 6th June, liberated at 9.00am in a Lt North to NW wind

Londonderry PRS 5/34 – D Kelly 1038, J Cassidy 732. Well done to both members timing in what turned out to be a hard task for the birds flying into the North-west today. Donal's winner is a 2020 late-bred carrying the bloodlines of his late father Joe's family of pigeons. Very well done Donal, good result.

Strabane & District –Patrick McNulty 1135, Neil McGavigan 1023, 1012, 919, Dessie Mullan 916, David Devine 820.  This has been a very difficult race and this week we have a very well deserved win with Paddy McNulty winning the club and having 3 in the Top 10 with only send his 4 pigeons. Neil McGavigan also had a great result 3 in the Top 10. 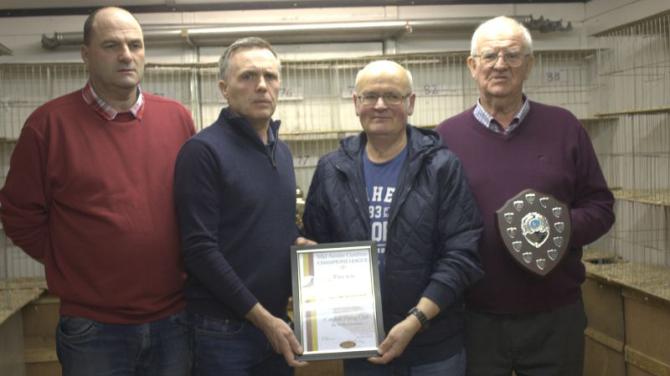 Ballymena & District HPS 8/177 – W & J Smyth 1307, 1300, 1297, 1292, 1289, R Service & Son 1278. Channel experts William & Joe Smyth had an excellent race taking the top five positions in the club. Their winning bird a yearling widowhood cock is again bred down from their Jackie Traynor bloodlines. Their second bird another yearling widowhood cock is bred off a cock from Donnelly Bros of Newry and last weeks Fermoy winner a two year old blue widowhood cock is place 4th this week. Great result for the 87 and 85 year olds.

Billy & Joe Smyth with Card of the Day in Ballymena & Dist. on either side of Johnston Eagleson. Between them they have won almost all the races in Ballymena. 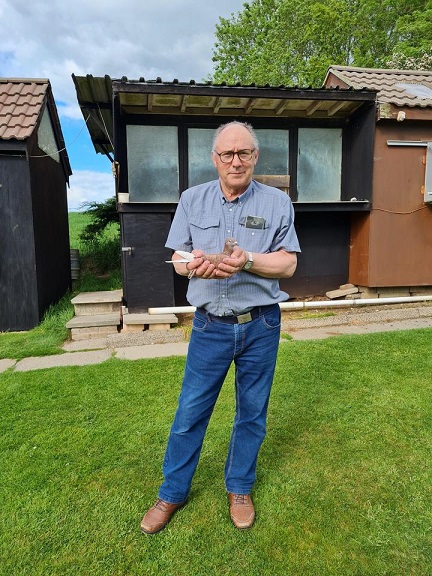 Randalstown loft of Stewart Bros had 1st, 2nd and 3rd Club from Talbenny. 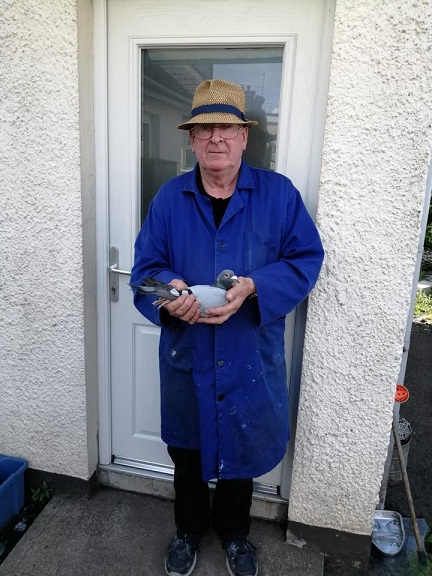 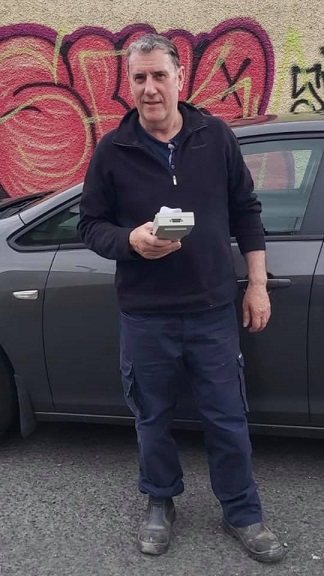 Laurelvale 12/343 – M Milligan & Son 1332, Stephen Fiddes 1332, S & N Lester 1316, Alan Craig 1307, Thompson Bros 1296, C Duke & Sons 1296. M . Milligan & son are top of the leader board today with a pied hen of Soontjen bloodlines raced naturally and sitting eggs. Closely followed by S. Fiddis in what was a difficult race with a few empty perches at clock checking. Well done to the Milligan team and all in the result. 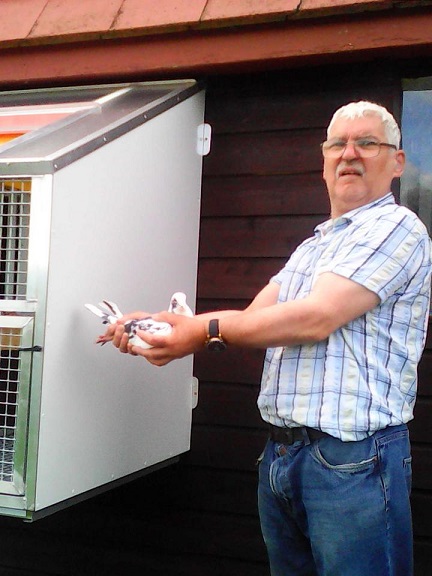 The Laurelvale winners in the 1st Talbenny were M Milligan & Son.

After a one day holdover due to poor weather conditions the NIPA released in Talbenny in Wales on Sunday morning the 6th June at 9.00am in a light north west wind. Best bird in the Mid Antrim Combine was a 3 year old blue chequer hen timed by Jimmy Smyth & Son of Ahoghill at 1.49pm for the 220 mile fly to their lofts to record 1340ypm. Combine runners up on 1334 were Associate members McAlonan Bros who enjoy plenty of success from the channel. Harold Cubitt last years Combine winner from the French OB Derby was nest best on 1330 followed by 2 good birds from Ahoghill's Mr & Mrs Robinson on 1329. Jimmy Rock was winning his fourth race of the season on 1312 with another bred from his good Delaney x Jacobs cock, channel specialists William & Joe Smyth had the top 5 in Ballymena & Dist. 1307, Stewart Bros topped Randalstown for their third win of the season on 1305, Sam Murphy best in Kells on 1298 and Davy Houston & Son were best their club for third time on 1297.

RPRA Meritorious Awards – Remember individual bird performance in the cross-channel races from 2nd Talbenny and Penzance, always a good idea to time plenty in Talbenny. Medals for the best bird in each NIPA Section and Cup to the overall winner at Ladies Night.

This week turned out to be a very difficult race for many, but this didn't stop Darren and willy Hamilton from claiming the top prize in the combine this week with a great result, well done Darren and willy, the full result is as follows.

Well done to all in the result and hopefully plenty turn in today.

Email: This email address is being protected from spambots. You need JavaScript enabled to view it.