The Remarkable Success of The Archibalds of Dover

THE REMARKABLE SUCCESS OF THE ARCHIBALDS OF DOVER

The 2014 Barcelona International race will go down as one of the hardest ever for British contestants. Quite apart from the distance that the pigeons have to fly to return to their home lofts in the UK, the 2014 race saw the Continental entries in the race enjoy good weather and helping winds over most of the course of the race. The British contingent on the other hand had to contend with a strong side wind, poor weather conditions on their line of flight back to the UK and finally the English Channel which, for most of the evening of the first day of the race and most of the second day until late afternoon, was blocked out with heavy rain showers and poor visibility. Nevertheless and not withstanding the handicaps set before them, the gallant few battled on to regain their home lofts beginning at late morning on the second day. 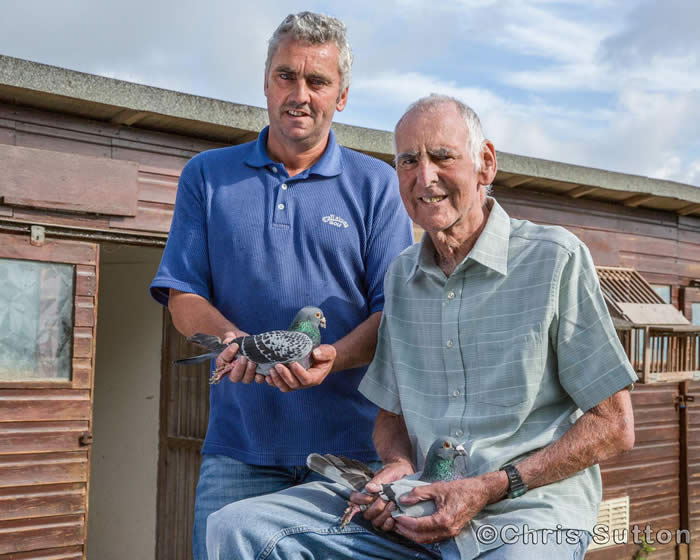 First to clock what was to prove later to be the eventual winner of the race, was the father and son partnership of Peter and Heath Archibald of Dover. This win comes after the partners had suffered a number of "near misses" in previous BICC National races. The latest being the 2012 Barcelona race when, once again, they were the first to clock only to be beaten by a bird flying to the Winkfield loft of Mark Gilbert, but more about their terrific 2012 runner up, later named Barcelona Bob, later in this article.

This Barcelona National win comes at a poignant time for the partners as Peter, the senior partner has been battling a serious illness for quite some time and his dearest wish was that they could win a BICC International race before he died. This wish has now come to fruition and the winning pigeon is aptly called "Peter's Dream".

As with most of the pigeons in the Archibald loft he is bred down from pigeons that Peter and Heath introduced in the mid 1990s from the top Welsh long distance fancier, R.O. Jones of Resolven in the Neath Valley in South Wales.

The R. O. Jones pigeons are based on generations of the old long distance bloodlines that had raced so well from Thurso and Lerwick. Robert Jones crossed into this family some of the best Jan Aardens that originated from Clwyd Lofts, and the subsequent generations of pigeons excelled at all distances.

This year's BICC Barcelona winner "Peter's Dream" is  a six year old widowhood cock that has plenty of "previous" including 2nd & 16th Open BICC Marseille and 35th Open BICC Barcelona. His preparation for his triumph from Catalonia was very limited in the early part of season, so much so that Heath and Peter thought he needed more hours on the wing and so sent him to BICC Poitiers on the 14th June when he homed first to the loft after 11 hours on the wing. 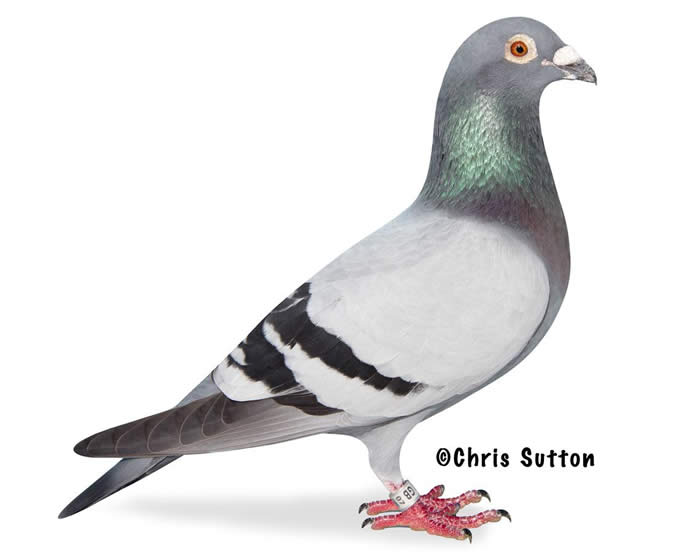 The following is an article that I wrote on the Archibald set up when I visited them a couple of years back. This will give the reader a greater insight into the loft set up and methods employed.

"On a recent visit to Kent I called in to view the pigeons of two of the rising stars on the BICC International race scene, the father and son partnership of Peter and Heath Archibald whose lofts are just a stone’s throw from the lofts of Lee and Kevin Buddle in Dover.

Peter Archibald caught the pigeon bug when still at school in the early 1950s. This came about when the young Peter caught a Welsh stray which kept returning to his garden. As a result of the Welsh stray’s persistence Peter housed him in an old chicken shed and soon caught a Belgian stray which was mooching around in the street, to keep him company. From that time onwards Peter was hooked and he soon won his first race in 1956 with one from his two bird young bird team!

The birds were kept on until Peter’s marriage in 1961 and with a new career in the civil service the birds were disposed of until Peter’s son Heath became interested in 1978. A new 8ft x 6ft loft was erected in the garden at the rear of the family home and a pair of Busschaerts was purchased by Heath’s grandfather to start the young novice off. The novice status did not last long as Heath won 1st Kent Cosmo Fed from Guernsey with a young bird and he too was hooked!

In 1982 Peter and Heath joined in partnership and a larger loft was built on a strip of land that Peter had purchased adjacent to their garden. Some more Busschaerts were purchased from Louella Stud with additions from Alfie Bence of Dover and the partners enjoyed a fair amount of success up to 300 miles including winning 3 x 1sts;2 x 2nds and a 3rd with the Kent Invicta Combine plus 4th Open Nantes against a field of 8,614 birds.

However, in 1993 some low life set fire to the loft and the partners’ team of widowhood cocks was lost. Heath and Peter came close to packing it all in but fortunately for them a local fancier was retiring from the sport and they purchased his loft and decided to carry on hence the title of this article.

The partner’s present day lofts are situated at the top of a very steep garden. Once at the top of the garden the visitor has a terrific view out to the south over Dover and the English Channel.

The racing loft measures some 30ft x 6ft and is divided into five sections and houses 22 cocks and just 30 youngsters. The usual practice is to mate some of the cocks to stock hens and these cocks are raced on widowhood whilst the remainder are raced on a form of round about system.

All birds are mated in early January and where possible they like to single rear the first round of babies. Once the youngsters are weaned Peter picks the best weather and starts to train the old birds out to 20 miles this is usually about two weeks before the start of the old bird season. During this time the birds are exercised regularly on good days and they usually go with a fair bit of vigour but they are never forced to fly. Yearlings are given a few short channel races in early May usually with the East of England Championship Club and the whole team might get a 20 30 mile toss midweek if the weather is suitable and if the partners think the birds need a pick me up. 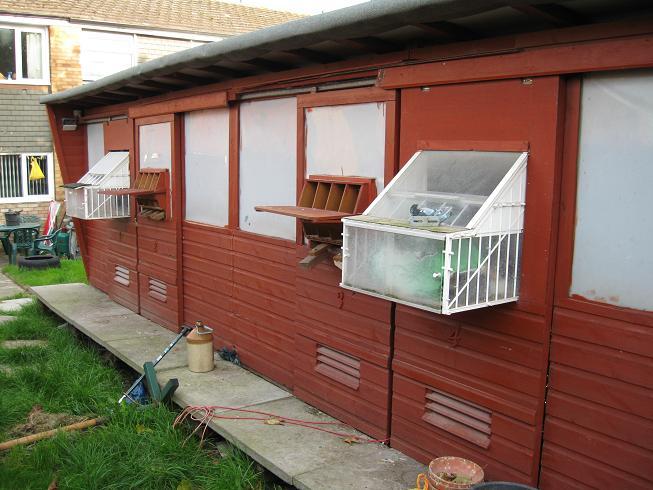 The birds are fed by hand on the various Gem mixtures with Gem Irish mix introduced once the races reach 300 miles. At this time they also have Hormoform, sunflower hearts and peanuts added to their daily diet in the build up to the longer races.

Medication at the Archibald loft consists of a regular treatment for worms and canker with the addition of Flightpath every month throughout the year. Naturaline is also given in the drinking water with the addition of crushed garlic. The partners' young birds have never suffered with young bird sickness since using Flightpath, so this very limited medical programme seems to have helped the birds develop a strong immune system.

The vast majority of the birds housed originate from an old friend of mine none other than Robert O Jones of Resolven, South Wales. These were introduced in the late 1990s and after a slow start, in which they took some time to acclimatise to their new surroundings, they then rapidly made up for lost time and have now established themselves as the mainstay of the Archibald’s channel successes.

During our visit we handled a number of top class pigeons including the following:- Chequer cock "Barcelona Bob" winner of 2nd & 4th Open BICC Barcelona and 5th, 17th & 30th Open BICC Pau International. This medium sized broad fronted slogger was a real handsome specimen and looked and handled like a show pigeon.

The following is a brief outline of Bob's early race record and preparation for his successful trips from the Catalan Capital.

Bob was never raced as a youngster, for no reason that Peter and Heath can recall but perhaps it was because they could see his potential?

As a yearling he went through the Club race programme to Tours 260 miles and in 2007 as a two year old he had Club races through to LE MANS and was then sent to BICC PAU where he was 1st sec. and 5th open on a very wet day.

2009 - raced through to BICC PAU  and was a little off the pace but homed safely.

The 2011 season saw Bob entered in one inland race followed by 5  short channel races to Tours at 260 miles and then to  BARCELONA to take 4th OPEN BICC.

In 2012 - he performed even better after the following reduced preparatory race programme of one inland race followed by LE MANS and BICC TOURS then off to BARCELONA to win 2nd Open BICC. 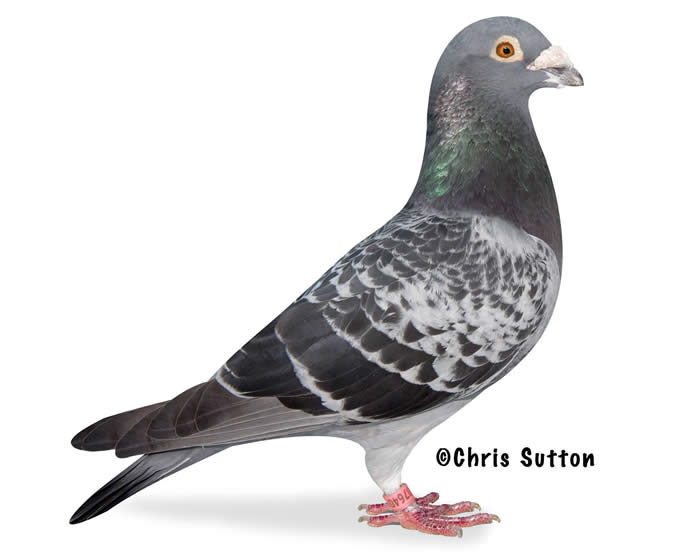 Next to hand was a blue cock, again just on medium size that has won 41st Open NFC Tarbes and 2nd & 16th Open BICC Marseille, the latter position won in the very hard 2011 race. [This is the 2014 Barcelona National winner now named "Peter's Dream".]

My pick of an extremely impressive bunch was a beautiful blue w/f hen that won 4th Open BICC Pau International being clocked on the day. In this race she was also 28th Open Hens International and 222nd Open International overall. This lovely medium sized, shallow keeled hen possessed a terrific eye and will no doubt do some more damage for Peter and Heath in the seasons to come.

One interesting story regarding this hen occurred in 2010 when, after winning 18th Open BICC Pau she was entered in the NFC Tarbes race some weeks later. Unfortunately she did not return home and Heath and Peter thought that she had gone forever. However, some four days after the race Peter received a call from a lady in Frinton on Sea in Essex to say that she had picked up a badly injured pigeon on the seafront. Luckily this was the blue w/f hen. Peter drove up to Essex to collect her and found that she had been very badly hawked and it looked very unlikely that she would survive. Some expert care and attention brought her back from the brink and she repaid the partners with her terrific Pau International result this year.

A young grizzle hen of Jos Thone bloodlines came next and she was the winner of 2nd Open BICC Guernsey young birds in 2011 when the vast majority of the early timers were clocked further up country in Essex and Suffolk.

The 2011 old bird season saw the partners’ pigeons win 4th Open BICC Barcelona;2nd Open BICC in the very hard Marseille International race plus 3rd Open Villenueve Sur Lot/Agen and a 4th Open BICC Pau on the day. Add to these wins a 8th Open NFC Pau;20th Open NFC Dax and 10th Open NFC in a recent young bird National plus 5th,17th,18th & 3oth Open in BICC races and you have a pretty impressive list of up to date performances in top class National and International competition. The reader should also be aware that the largest team sent in these races was just four pigeons.

I look forward to reading the results of the NFC and BICC in future long distance races as I feel sure that the name of H & P Archibald will be regularly featured near the top."

Well done Peter and Heath. It has given me great pleasure in bringing your story to the general public. In fact, writing this article on your loft and successes has probably been the most pleasing of any that I have written over the past 40 years. I wish you both well.