ROSE OF THE SHIRES

In the Raunds club from Berwick on the 17th May, it was Adrian Webb who made all the running with one of his very well trained Tumley Lofts Janssen cocks, on the roundabout system doing 1191ypm and being 8 mins before the next bird.  He was 2nd club 10th Fed last year as a youngster and this year had 5th club Wetherby.  Evergreen Mick Lawless clocked one of his better performers, a Willy Thas widower doing 1158ypm for 2nd spot.  I say better performers as this 2 year old has 1st club 1st Fed Pontefract, 1st club 1st Fed Pontefract Charity Race, 2nd club 10th Fed Wetherby and 3rd club 9th Fed Berwick all 2008 and was in the clock last week from Morpeth. The Club Chairman and Secretary partnership of Robin and Pat Hallybone, clocked a John Ramm “Van Church” cock doing 1152ypm for third place.  This bird was one of a pair donated to the club by John Ramm at the annual prize presentation in 07 as a raffle prize.  Robin won the first prize and turned down a loft hoover in favour of these birds.  Both have shown promise on the road but are useless at sucking up dust. Pete Madejczyk claimed the fourth prize with a Buschaert x Neil Burt Jan Aarden that won Retford earlier this year.

The first of the real Scottish Races was won in convincing style by the distance experts Barry and Joy Andrews and not for the first time.(see photo).  Ex\club member Ian Jarratt was at the loft on a spying mission for son Robert when this bird dropped like a stone bang on line in the light easterly wind to record 1103ypm beating the next club bird by 37 yards.  This two year old Buschaert cock was the produce of two direct Louella Buschaerts bought in 2000 (hen) and 2002(cock) as babies.  The sire, better known as “66” has many 1sts to his credit and this young cock seems dcestined for similar fame.  He was the partnerships first bird from Morpeth and then probable 3rd Section NRCC Dunbar last week.  He was well fancied winning the pools and snowball in the club and the PJ Lofts nomination for a TV in the Fed plus 1st Fed and very likely 1st East Midland North Road Amalgamation. A fantastic performance against the wind and birds flying up to 30 miles shorter.  It must have been a week for the stars to come out as Pete Madejczyk’s top bird was 2nd club and will be well up in the Fed result.  This widower recorded 1066ypm (that number rings a bell) zand adds this card to the 1st Club, 1st Fed and 13 Amalgamation Fraserburgh in 2007 and 3rd Scotch Corner, 6th Wetherby and 2nd Northallerton 2008.  And it breeds them as well!  Phil Lane showed that he is not just a sprinter when he clocked a Van Reet widowhood sprinter in for 4th place.  This cock has 4x1sts and several more sprint cards to its credit and is one of Phils well known Van Reet sprint family.  Mick Lawless made sure of the Up to Berwick averages just in front of Adrian Webb after clocking a Willy Thas widower to win the 4th place.  This is another cock with good performances behind him having topped the Fed as a baby from Scotch Corner and taken 2nd Wetherby this year. 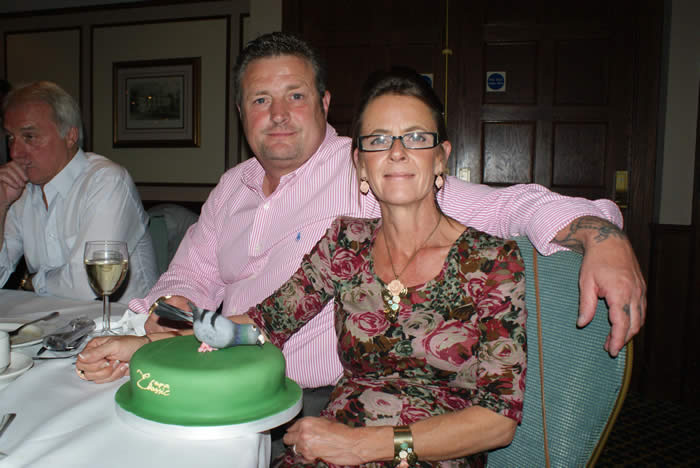 The birds were collected from the Raunds club for this race and this gave local fanciers the chance to see the impressive Leicester Fed transporter.

The club would like to thank those fanciers who stayed on to load the birds up and to remind others that it is not the job of the Raunds members to load birds.  Each club should be prepared to do their share.

Up to speed now and the Federation birds were at Scotch Corner on the 30 May on what was to be a very warm weekend.  The birds were away into a cloudless windless sky at 0700 hours and a steady race was expected.  As it turned out they did a little better than many thought, recording speeds of nigh on 1400ypm.  Obviously assisted somewhat by the north easterly wind that became apparent as the birds progressed down country.

In the Raunds club 7 members sent 82 birds that were led home by Robin and Pat Hallybone’s Louella Lofts Bert Braspenning Janssen cock.  This cock was a notoriously bad trapper and was left this week with an open door and he shot straight through. He had shown little form before today but is now strongly fancied for the up coming Elgin event.  Last weeks winners were in the shake up again in the form of Barry and Joy Andrews, whose Corbett Busschaert was just 5ypm behind the winner on 1362ypm.  The Hallybone partnership rubbed it in a bit, when taking the 3rd spot as well with another Braspenning widower on 1350ypm.  Another “bought in” bird this cock had 2nd club 2nd Fed Scotch Corner and 2nd club 3rd Fed Pontefract in 06, 2nd club 2nd Fed Perth and 4th club Wetherby in 08 and 3rd club 8th Fed this year.  Ever present Mick Lawless made up the four places with one of his Shearsby of Corby Vandebeale x Catrysse widowers.  Bred in 06 this bird had shown little inclination for speed until Fraserburgh last year, when he scored 1st club 1st Fed and 3rd Amalgamation.  Mick was getting it ready for next weeks Elgin race and hopes that it hasn’t peaked to soon!

Roger Withall took 1st club with his Busschaert cock, doing 1109.586. This 2yr old was a gifted bird, from Mr Don Salt of Derby. Wisken & Wigfall netted 2nd club, with a blue hen doing 1108.509. This yearling hen is out of Stu's Felix Powell family and raced all the young bird races. C.Freeman (Wag) took 3rd club doing 1099.456 with a cheq hen. She was bred out of Alf Jones stock. Alf Jones a ex-north road fancier, who's club in Northampton turned south. For many year's Alf was a major part of Northampton North Road Fed. He was a highly respected fancier, he was our race controller, chairman and gold club winner. Alf is also our local Auctioneer, and with his big personality never fails to raise us outstanding amounts of money, for our Fed Breeder/Buyer.

Congratulations to Alan on his 1st club/2nd Fed at Perth, and tell him auntie sends her love ha!

Desborough:  J.Gateley 48th. N&A Marlow 50th. Well Done lad's for a place in the top 50. Congratulations to all the Leicester winner's. We hope all the bird's sent got home safe and sound.

We hope you all got your bird's home safe, no doubt gasping for a drink with the heat of some races. Well Guys and Gals, keep praying for the lovely weather and many more B.B.Q week-ends. Be Good, Keep Safe.