News From Scotland With Joe Murphy

With all the announcements regarding the Coronavirus virus from the prime minister this week, to avoid pups, restaurants and people to work from home. They have also stopped football, the Euro championship is postponed till 2021, the 6 nation’s rugby is stopped, and the Masters is stopped. It is only inevitable that pigeon racing will be stopped as well. Plus vulnerable people would have to self-isolate for 3 months then there the travel chaos throughout Europe and the lockdown is to last until the summer. When you think of it the majority of fanciers are OAP’s I’m not saying they are all in their 70’s like me, but there are a lot of people who are. Many like me have pre-existing medical conditions and we are advised to ‘largely shield from social contact’ for 12 weeks.  This means staying indoors and avoiding going into public places. So how can we take our race birds down to the club, or join up with our fellow club members at the pigeon club for race marking or clock checking. Yes you can maybe take them down and leave your basket at the door for someone to collect and give you back your empty basket and clock. We may get inland pigeon racing later in the year in the UK but there is not much hope of getting racing from France or the International race points with the BICC.  Kevin has just informed me that the SHU have put out a notice to their members as follows. ‘Having considered advice from the Scottish Government, the SHU can confirm their thought that the Coronavirus will get worse before it gets better. We therefore advise all members and organisations that pigeon racing will be postponed until 1st May 2020. The advice also indicates that gatherings should not take place therefore pigeon sales, breeder buyers events etc. should not go ahead until further notice. The SHU will endeavour to keep fanciers abreast of current information and recommendations from the Scottish Office

My thanks go to Barry Kinnear, Willie & Barbara Dunsmore and Gerald Macpherson for supplying me with details of their Dewar Trophy winner and runners up for the award. The information supplied was excellent with little pieces of gem that make the story more interesting. Other fanciers have phoned saying they are looking forward to reading this story as it is all about Scotland’s Pigeon of the Year. There have been many great birds over the years and even the runner’s up are very special pigeons.

News from Archie McIntyre, who informed me, that the above club held their 2 Bird Challenge presentation night, in the “Tea in the Square” café in Largs on the 15th October. David Craddock, Dalry HS current President with his wife Susan, own and run the café as well as the Largs Post Office. Before starting my report, I would like to take this opportunity on behalf of the membership of Dalry HS to thank David & Susan firstly for the use of their café for the presentation and secondly, for the exceptional hospitality arranged by David & Susan. Dalry Homing Society for the 5th year running held their Annual 2 Bird Challenge race flown in conjunction with Ayrshire Federation’s young bird race from Dunbar (1) on the 31st August 2019 for a prize fund of £1000 plus £150 in donations from our sponsors. The prize fund is split as follows, 1st Prize £500, 2nd Prize £250, 3rd £100, Prize Draw (All entered teams go into a prize draw) £100, Highest Individual Velocity for an Activated or Non-Activated entry £100 and 2nd Highest Individual Velocity for an Activated or Non-Activated entry £50. Once again the 2 Bird Challenge was well supported this year with 55 teams made up from, Dalry HS 33 teams, Ardeer HS 14 teams, Crosshouse HS 2 teams, Mauchline HS 2 teams, Kilmarnock Invitation 2 teams, Irvine HS 1 team and Kilwinning HS 1 team. As well as the afore mentioned clubs, we also have non-Ayrshire federation members who enter their teams every year to fly through friends lofts and also we have non-members of clubs who select themselves a team from their friends loft’s in Ayrshire to have wee flutter in the race as well. This season was another challenging year for our young birds. The 2 Bird Challenge race was due to be flown from Appleby (1) on the 27th July but due to the disastrous young bird race from Stobbs Camp (1) the previous week, the federation cancelled the following weeks race from Appleby (1) to give the young birds that made it home a chance to recover. The Federation then made the decision for the welfare of the young birds to change the remainder of the programme and move them away from the westerly side across to the east side of the country. A decision I must say turned out well in terms of returns from these races. This year we had 14 teams making the result, an increase of one team on 2018. This was something we were not expecting given the heavy losses the membership experienced at Stobbs Camp race earlier in the season. Winner of the 1st Prize of £500 is partnership of Jim Stirrat & Davy McKenna of Ardeer HS on a combined velocity of 1025.7. Jim & Davy are regular supporters of the Dalry 2 Bird Challenge and it was nice to see them coming out winners this year. The 2nd prize of £250 goes to Tom Smith of Dalry HS on a combined velocity of 977.5.  This was the 2nd year on the trot for Tom picking up the runners up prize.  3rd prize of £150 goes to Mr. & Mrs Ramsay & Son of Dalry HS (Team Alex McInnes) on a combined velocity of 959.1. Alex McInnes from Blantyre is another regular supporter of the Challenge race. Although Alex is a member of Lanarkshire federation, he always sends young birds down to his good friends Mr & Mrs J R Ramsay & Son to enter a team on his behalf. Alex has certainly done well out the challenge races over the years winning quite a few prizes. The winner of £100 for the highest individual velocity (1108.6) for an activated or non-activated entry was won by partnership of Jim Stirrat & Andy McKenna of Ardeer HS. This brings the partnership winnings up to £600, not bad at that. Winner of the 2nd highest individual velocity (1096.7) and £50 for an activated or non-activated entry was another Ardeer HS member, Derek Kane. The prize draw for £100 took place at this year’s presentation night and was carried out by Mrs McCann. Tom Smith of Dalry HS carries off the £100 cheque to add to his £250 from his 2nd prize win giving him a nice we lift of £350.  I would like to take this opportunity to thank all our fellow fanciers from Ayrshire and out-with Ayrshire who continue to support the 2 bird challenge. I would also like to say a special thanks to our sponsors this year, David & Susan Craddock of the “Tea in the Square” café and Largs Post Office, Andy Barbour of A J McAlpine Construction and Tom Smith of Dalry Homing Society. Many Thanks once again from the members of DHS and hope to see you all competing again next year. Thanks once again for all your support in publicising our events Joe, yours Archie McIntyre race secretary Dalry Homing society. 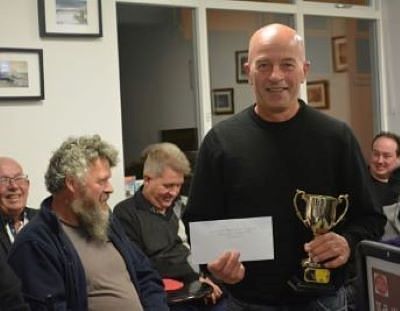 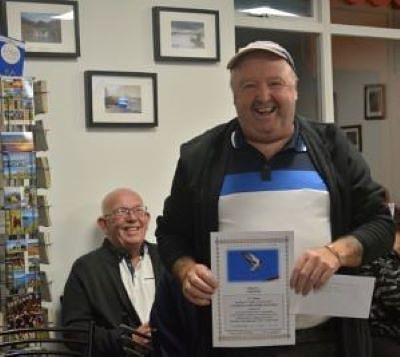 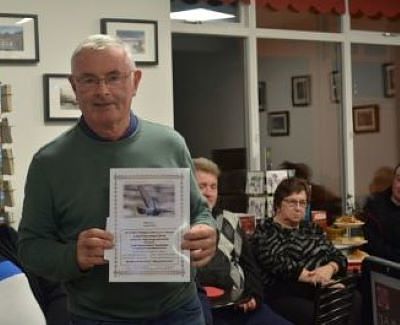 Had a phone call from Stuart who informed me that Wull Strang who flies in partnership with his brother Jock and originally came from California. They were in my sporting challenge a few years back and we have been friends for more years than I care to remember. We have also visited each other’s houses over the years, and have had some great times together. Jock and his wife Betty were married on the same date as us which was also a momentous connection in our relationship. Jock was signed for Glasgow Rangers as a young boy when John Greg was also trying to make it into the first team. We have had some good banter over the years when it came to Old Firm games and the fun we have had has been wonderful. I asked Jock about Wull (aged 77) and he is confined to the house now and is having carers coming into him on a daily basis. Jock’s wife Betty has not been well of late either and we wish them all the best and they are in our thoughts and prayers at this time.

I received a phone call from Peter Keogh of Broxburn thanking me for highlighting his pigeons in my Good SNFC Birds feature, we discussed his pigeons and I obtained his number in the event that I may require more information on his birds when (not if Joe M) they go on to obtain more national diplomas. Peter has also put his national winner into the stock loft, so can enjoy looking at it every day from now on, thank you for the call it was much appreciated.

Received the following from Mike Massie of Aberdeen who wrote ‘Hello Joe hope you are keeping well, please could put this in your column and let the pigeon fraternity know the sudden passing of my very dear and good friend Colin McEwen. Colin passed away at the end of February aged 62 years. Colin first and foremost was a family man and he loved family gatherings and holidays together. Then came the ‘doo’s’ he loved racing and showing them and he was very successful, he also held many positions in the Aberdeen federation being vice president etc.; he was also a founder member of the biggest pigeon club in the City Sunnybank  Club. Colin was also into boxing in a big way and he was the manager of the Scottish amateur boxing team when they competed in the Commonwealth games in India. To his loving wife Jackie and 3 daughters and his 5 grandchildren you have my condolences. Rest in Peace my old friend and good mate.

A young man goes into a drug store to buy condoms. The pharmacist tells him that the condoms come in packs of three, nine, or 12, and asks which ones the young man wants. "Well," he says, "I’ve been seeing this girl for a while and she's really hot. I want the condoms because I think tonight's the night. We're having dinner with her parents and then we're going out. Once she's had me, she'll want me all the time, so you'd better give me the 12 pack!" The young man makes his purchase and leaves. Later that evening, he sits down to dinner with his girlfriend and her parents. He asks if he may give the blessing and they agree. He begins the prayer, but continues praying for several minutes. The girl leans over and says, "You never told me that you were such a religious person." He leans over to her and says, "You never told me that your father is a pharmacist."

Please continue to keep the news flowing; to Joe Murphy Mystical Rose Cottage 2 Flutorum Avenue Thornton by Kirkcaldy KY1 4BD or phone 01592 770331 or Email to This email address is being protected from spambots. You need JavaScript enabled to view it. REMEMBER THE J IN THE MIDDLE or you can also view online editions on: www.elimarpigeons.com www.fancierchat.co.uk www.pigeon-chat.co.uk - www.Pigeonbasics.com - Pigeon Racing the Basics! - thecanadianpigeoninternational.com www.internationalracingpigeon.com or

Who wish my weekly contribution portfolio on pigeon topics from Scotland